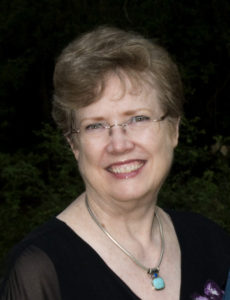 Diane Rapp is a split-personality author, who writes mysteries and science-fantasy novels. She began writing fiction to cure insomnia while selling real estate, but she got serious after publishing a Caribbean guidebook with her daughter.  Research for the guidebook helped her create a cruise ship mystery series.  Readers learn about the main characters and get a glimpse of the crew’s life aboard a ship.  Of course there are murders to solve with danger and romance mixed in with the action.  Diane vividly describes actual places ships visit along the route.  Her most recent cruise-ship thriller, DNA Stalker, begins with the Jonestown Massacre nearly forty years ago.  The characters must guard six sets of identical twins, who are targeted by a ruthless stalker.

Diane’s first love is actually science-fantasy.  As an animal lover, it felt natural to devise stories involving telepathic wolves who interact with humans on a distant planet.  The series begins on Earth, introducing the ancestors of a pack that eventually colonizes the distant planet, Drako.  As humans and wolves interact in the future, the wolves wonder if the “two-legs” they meet can actually be intelligent.  A feudal government makes the survival of new arrivals dangerous.  Follow an intricate cast of characters as they try to fend off an attack from space.

Between writing mysteries and science-fantasy, Diane diverged to write an historical novel combined with modern adventure.  The characters solve clues found in an ancestor’s journal to locate a family gold mine in the gold country of Colorado, facing dangerous terrain and people out to steal the gold.

Diane is currently working on a five-book series of mysteries with NO murders.  Dog and cat sidekicks work alongside their humans to unravel kidnappings, robbery, terrorism, and archeologic vandalism.  The first novel features Bentley, Diane’s own talented Standard Poodle.  He uses his agility training to protect his mistress from harm.

To learn more about Diane and connect with her, click on the following links:

What a great deal on this 8″ tablet!

“As an Amazon Associate, I earn from qualifying purchases.”

This mouse and keyboard saved my wrists!

“As an Amazon Associate I earn from qualifying purchases.”